The course aims to provide you with a foundation understanding of Kiswahili language, enabling you to begin communication in practical situations and to give you an insight into Swahili culture.

A personal pronoun is a pronoun that is associated primarily with a particular person, in the grammatical sense.

When discussing “person” in terms of the grammatical, the following rules apply:

The tense marker indicates the verb’s tense—whether it is happening right now, in the future, in the past.

A helpful trick to remember the tense prefixes is by using the common girls' name "Natalie". Except in our case, it's "na-ta-li".

The tense marker indicates the verb’s tense—whether it is happening right now, in the future, in the past.

A helpful trick to remember the tense prefixes is by using the common girls name "Natalie". Except in our case, it's "na-ta-li".

Turn a verb into doing/action word

Make a verb doing word, while it may take some time and practice, you can eventually learn the right forms. Even native speakers may sometimes use nouns as verbs in colloquial language.

Turn a verb into doing /action word -To be (Kuwa)

In Swahili, intonation is used to differentiate a question from a statement. There are mainly 2 ways of asking a question to get a yes or no answer, and they are the following:

-Pronoun+ verb: Like English, the auxiliaries do and does are used. Swahili uses auxiliary -na together with the personal pronouns. For example Nina wakati?( do I have time?), Una wakati?(do you have time) Ana wakati? (does she have time?)

So you realise ni- 1st person, u- 2nd person and a- 3rd person. So, the English do is used only in the 3rd person but can only be evident from the translation

the issue f pronouns can be seen later.

You realise that in the above example i used the 2nd pesron pronoun. You can do the same with the pronouns of the first person and the second person.

These conversation lessons have been created to assist in the different everyday scenarios you will encounter; they will help you string together the verbs you will use. The lessons are structured so that you can roleplay along with the students.

Going to the doctor

Conversation: at the airport & roleplay (4.00m)

At the airport & roleplay

Going to the market & roleplay

Ways to say thank you.

NOUNS
Noun classes are probably one of the hardest parts of learning a bantu language (which Kiswahili is). The good thing is, you have probably been doing this (to some degree) already!
A noun is a part of speech that names a person, place, thing, idea, action or quality.

Here you will find your workbook, additional video content, and other useful tools to help you with your goal in learning Kiswahili.

Check back regularly as new supplementary material will be posted here.

Here you can purchase lessons and don't forget to enter the special members discount code shown above to save more! 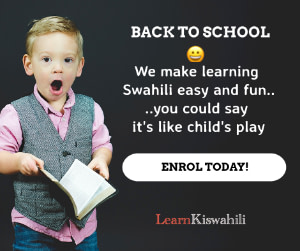